A Caribbean company owner offering dry cleaning services struggled with expensive public water costs and poor water quality. Due to the inferior water quality, a fresh water treatment system was required before the public water could be used for commercial washing. However, the previously installed system involved a great deal of daily maintenance efforts, and it was therefore extremely time-consuming to run.

Through a local café owner, previously visited by AqSep, the customer learned about AqSep desalination technology which subsequently initiated the collaboration. A suitable solution was found, and the customer now has six WM22000E desalination units, four of which are used for normal operation.

Thanks to AqSep reverse osmosis technology, the company owner has achieved significant cost reductions. The customer has a daily consumption of 20,000-25,000 gallons. The direct costs of electricity for the desalination units are just above US$2000, but in total it is a saving of roughly 80%. This allows a payback period of approximately one year. In addition, the water quality of the desalinated water has improved which results in less use of chemicals when laundering linen, and the time spent on maintaining the water supply has been significantly reduced.

The company owner states: “Owing to AqSep’s desalination units, I now save money by producing my own water. Beyond that, the improved water quality results in reduced use of detergents. Overall, it has been a worthwhile investment.” 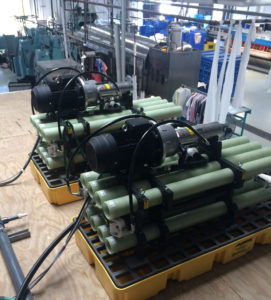