As with other offshore installations such as oil rigs or fish farming, ocean-going navy vessels are accustomed to produce fresh water from seawater. However, the vessels cannot rely on storage tanks but require freshwater production to be available 24/7.

Several Australian navy vessels had to be updated with new seawater desalination units as the previously installed units were lacking capacity. The Navy needed to ensure that adequate water was available for the increased crew sizes. Due to space and power constraints, the desalination units were required to fit within the existing space and produce more water without exceeding the previous power consumption.

In this case, single VILLA WATERMAKER units were installed. These units fit the space allocated and produce 67% more water while expending less than 50% of the energy compared to the previous desalination units. The VILLA WATERMAKER units were additionally chosen due to their manufactured quality and long-term reliability. As a result, the scheduled maintenance has also been significantly reduced.

Owing to AqSep desalination technology, the crew now has plenty of fresh water, and they no longer have to worry about maintenance efforts as the desalination units operate fully automatically and adapt to changes in seawater salinity and temperature. 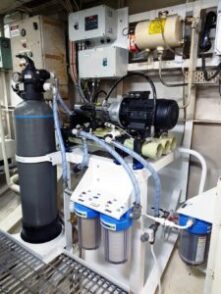 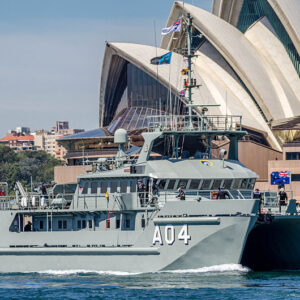 This website uses cookies to improve your experience while you navigate through the website. Out of these cookies, the cookies that are categorized as necessary are stored on your browser as they are essential for the working of basic functionalities of the website. We also use third-party cookies that help us analyze and understand how you use this website. These cookies will be stored in your browser only with your consent. You also have the option to opt-out of these cookies. But opting out of some of these cookies may have an effect on your browsing experience.
Necessary Always Enabled
Necessary cookies are absolutely essential for the website to function properly. This category only includes cookies that ensures basic functionalities and security features of the website. These cookies do not store any personal information.
Functional
Functional cookies help to perform certain functionalities like sharing the content of the website on social media platforms, collect feedbacks, and other third-party features.
Performance
Performance cookies are used to understand and analyze the key performance indexes of the website which helps in delivering a better user experience for the visitors.
Analytics
Analytical cookies are used to understand how visitors interact with the website. These cookies help provide information on metrics the number of visitors, bounce rate, traffic source, etc.
Advertisement
Advertisement cookies are used to provide visitors with relevant ads and marketing campaigns. These cookies track visitors across websites and collect information to provide customized ads.
Others
Other uncategorized cookies are those that are being analyzed and have not been classified into a category as yet.
Save & Accept